A temporary public art event in celebration of National Banned Books Week and the freedom to read, express, and create. The library will showcase works of art by local DC artists pertaining to the theme of censorship.

My contribution, The Red Books, commemorates the courage and stealth of individuals involved with the dissemination of written texts that have been condemned and censored by authorities. I chose to focus on the work of humanist poet Anna Akhmatova (1889-1966), and Muslim theologian Said Nursi (1877-1960). I have personal experience with the writings of both, and have recently visited their native countries, Russia and Turkey, respectively, and found striking parallels in their struggles with new concurrent regimes and shifting ideologies after the First World War - Stalin's Soviet Union after the Russian Revolution, and Ataturk's Turkish Republic after the dissolution of the Ottoman Empire.

Although I am referencing the long intertwined histories of Russia and Turkey, I want to highlight the humanistic and spiritual messages of two individuals whose words were aggressively opposed by authorities for all the wrong reasons, and whose followers courageously and faithfully transcribed and distributed their texts under the radar, ultimately overcoming ignorance, power, and destruction.

The visual collages reference the paper fragments, small containers, and the light of so many burnt matches, that all facilitated the dissemination of Akhmatova and Nursi's writings. 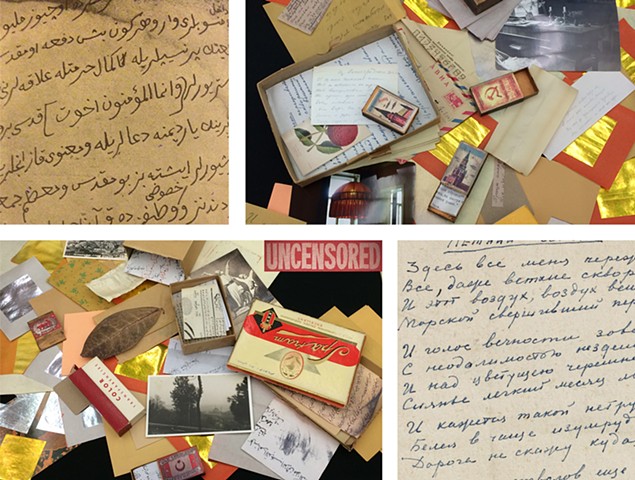